Hey everyone, how was your weekend? I had a great one and I'm excited to share that I attended the launch of The Morgan Magazine on Saturday! The magazine is the creation of NYC-based celebrity fashion stylist Fatiah Rebbekkah. The launch was held in the chic, sleek 40/40 Club NYC, co-owned by Jay-Z, located in the Flatiron neighborhood and very close to Madison Square Park.
I arrived at around 7 p.m. told the people at the door that I was there for the magazine launch and was instructed to go upstairs to the party. I walked to the top of the modern, glass-detailed staircase, greeted by a nice gentleman Sa' Quan and was given a little pink paper bracelet as proof of admission to the event. The cool music provided by DJ Drewski electrified the room.
Then, I found my way to the area where people were taking pictures. I took a seat right at the very front so I could see the parade of unique style. I had a blast checking out the outfits everyone was wearing. Styles ranged from chic to flamboyant and everything in between.
I met a young lady named Jessica, a grad student studying chemistry, who was nice enough to take my picture at the event. I also took pictures of her on her camera for her.
I also met journalist Denise who was covering the event as well Amari and Queen who later liked my Instagram pics of the event. Special thanks to Fatiah Rebbekkah for following me on Instagram!
The event wouldn't have been complete without having the featured cover man football player Julian Talley of the NY Giants taking pictures with attendees, Fatiah and proudly holding his magazine cover photo.
I had a lovely time at the launch and wish Fatiah and her team the best of success with the magazine. I enjoyed the ambiance of the stylish club, positive energy and friendly people. Stay tuned for tomorrow's fashion roundup of the event.
Until then here are a few photos from the launch.
Photo 1: Me; Photo 2: Julian Talley, NY Giants; Photo 3: Fatiah Rebbekkah in black dress. 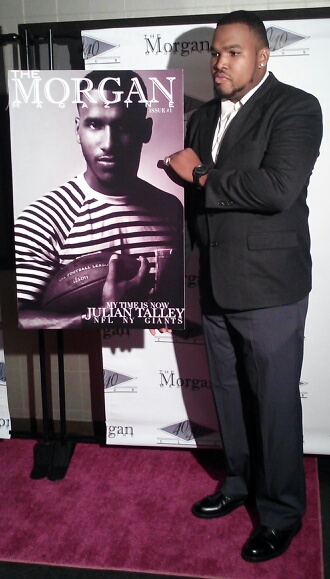 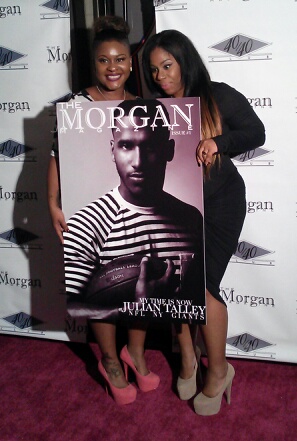